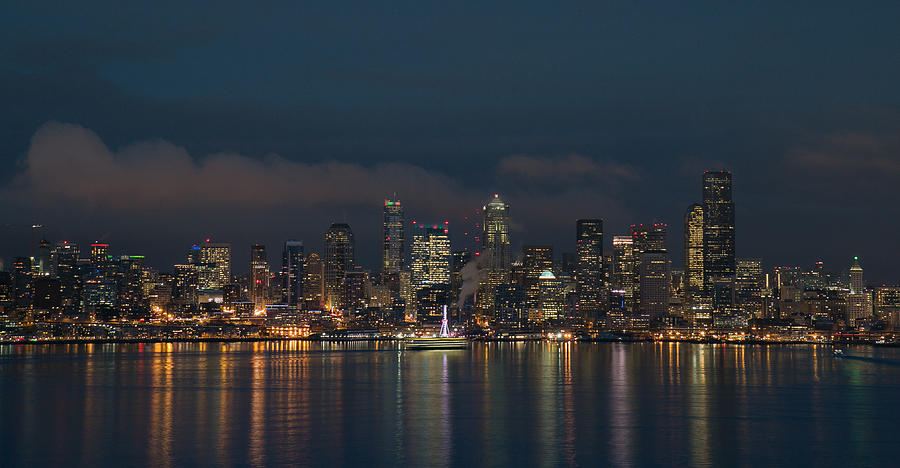 Seattle, Washington State's largest city, is known as the Emerald City. Although, if one is a fan of American football, Seattle may be better known as the home of the Super Bowl Champion Seattle Seahawks. Captured after the winter sun was completely set, the lights of Seattle's waterfront and downtown high-rise buildings reflected off the calm waters of Elliott Bay. Observed from Hamilton Viewpoint Park, the blurred light in front of the Ferris wheel (Seattle's Great Wheel) is that of a moving Washington State ferry. Two ferry runs operate out of downtown - one to Bainbridge Island and the other to Bremerton.

A special thank you to the following Fine Art America groups for featuring this image:
-- THE WORLD WE SEE
-- PREMIUM FAA ARTISTS
-- 3 A DAY AAA IMAGES
-- VISIONS OF THE NIGHT
-- ALL THINGS REFLECTIVE
-- 1 A DAY WAITING ROOM ART

A beautiful night shot of the city Faithe!...f/t/l

Grateful to Pamela Luther and the group 3 A DAY WAITING ROOM ART for featuring this night shot. Thank you.

To Neal Eslinger, with the group ALL THINGS REFLECTIVE, so grateful for the "featured" badge. Thank you.

Proudly wearing "featured" from the group VISIONS OF THE NIGHT. Grateful to Eti Reid for giving her leadership and management to this group. Thank you.

Thank you, Chuck Hicks, for honoring me with "featured" in the group 3 A DAY AAA IMAGES.

Wonderful cityscape E Faithe, the reflections add to it perfectly